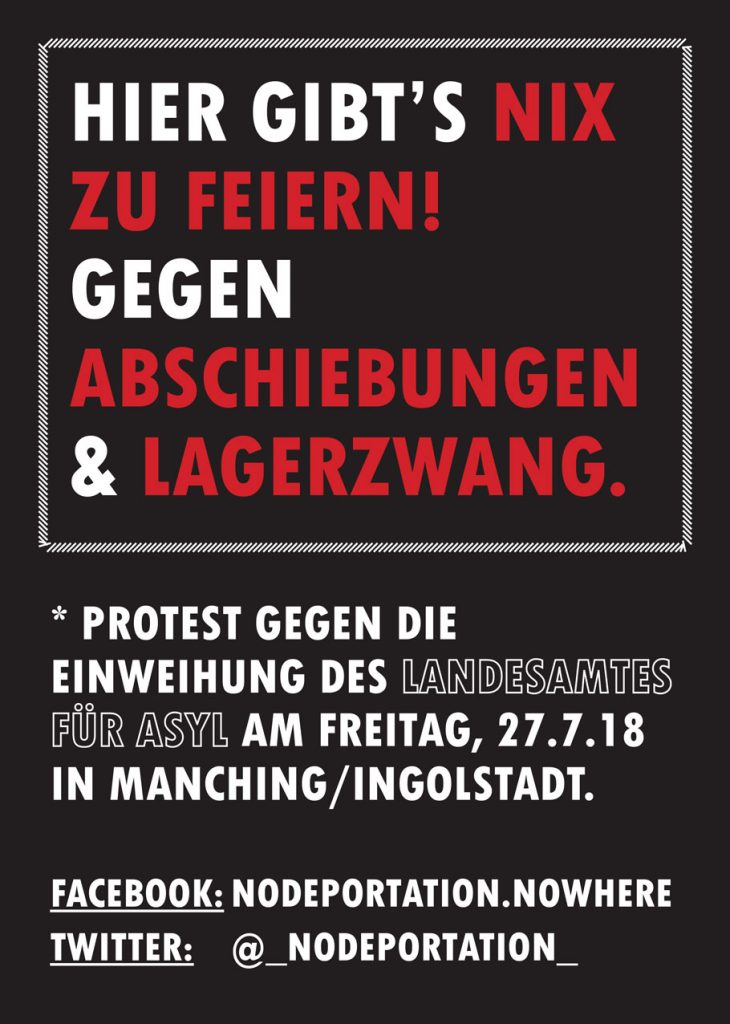 Against Deportations and forced camp residence.

On the morning of Friday 27th of August, Söder and Herrmann are coming to Manching to celebrate the inauguration of the state office of asylum. We find this sickening. The CSU is hereby realising its plans to accelerate deportations and augment their powers on a state level. They are making true on their threats, motivated by racism, to take the violent deportation of people into their own hands and to make the situation of refugees even less bearable. Deportations and the right-wing election campaign of the CSU are no cause to celebrate.

Deportations are a form of psychological and physical violence. People seeking protection live with the constant threat of being picked up overnight. The fear of being involuntarily deported to places where they face extremely hard or even lethal conditions is psychological terror. In addition to this, the police uses violence when executing the deportations. People are generally woken without warning in the early hours of the morning and are forced to pack their things in a matter of minutes. Anybody who does not comply is subjected to violent treatment. The (re-)traumatisation of refugees is knowingly taken into account. People are deported even if they are certifiably ill or suicidal.

Abolish the forced residence in camps!

The CSU’s party is to take place on the grounds of the Max-Immelmann barracks (MIK) – the so-called transit center East Manching, where the executive seat of the future state office for asylum is planned. On the 1st of August 2018, this center, together with six others, is to turned into a so called AnkER center. Regardless of the name, it is already clear for what these centers stand: deportation, isolation, traumatisation. The MIK and all other AnkER centers stand for isolation of refugees, deportations, security and police violence, absurd prohibitions, disregard of basic rights, barring children from education,… the list is long, and none of it gives cause to celebrate. Camp residence destroys peoples physical and mental health. Forcing many people into tightly confined spaces and subjecting them to subject them to enormous physical and psychological pressure through the denial of privacy, constant observation and security violence has been proven to lead to the traumatisation of adults and minors. Avoiding psychological and physical harm is a constant daily struggle in the deportation camps. Violence is omnipresent in the lives of refugees. By being forced to reside in camps they are locked away barred from society, while the racist conditions drive them as far as suicide. The dying in German camps is a terrible reality.

Already before the renaming of the centers, the word AnkER has been a symol for deportations and right wing baiting. The aim is to force people into agreeing to ‘voluntary’ departures through forced camp residence and ever stricter asylum legislation. Nevertheless there is resistence against societal attacks on refugees. The towns Ellwangen, Manching, Deggendorf, Donauwörth, Bamberg, Memmingen, etc. do not only stand for the violent criminalisation of politically active people though the state and the police. They also stand for the solidarity between activists with and without secure resident status against forced camp residence, work prohibitions, residency restrictions, non-cash benefits, prohibition of education and much more. In the last years powerful fights have achieved some degree of relief, all of which has now been gradually recinded.

While the minister of the interior, Seehofer, celebrates deportations to Afghanistan as a birthday present, the festive inauguration of the state office for asylum shows yet again how the CSU is using the active oppression of refugees for their reactionary election campaign. We find this insufferable. Refugees are subjected to a repressive and racist system. Deportations are no cause to celebrate. They are a cause for resistance.

For this reason we are calling to protest against the absurd inauguration party and the CSU’s policies.

Come to protest in solidarity against deportations and forced camp residence at 9 o’clock on Friday the 27th of July in front of the deportation camp in the Max-Immelmann-Barracks in Manching.

For there is truly no reason to celebrate!