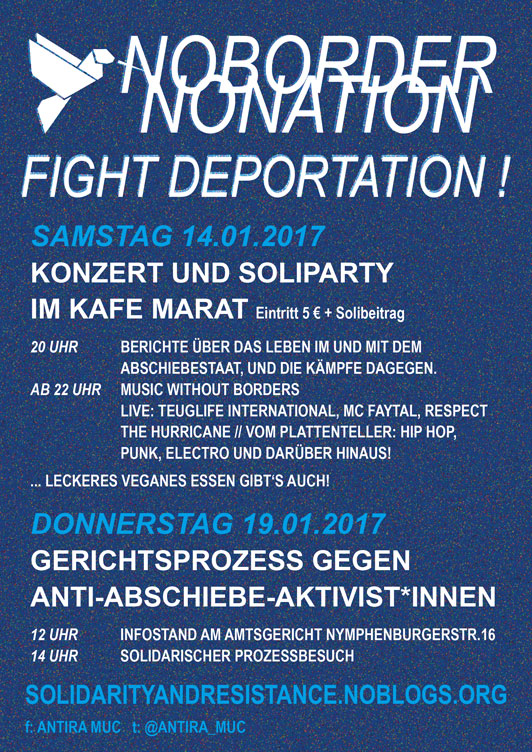 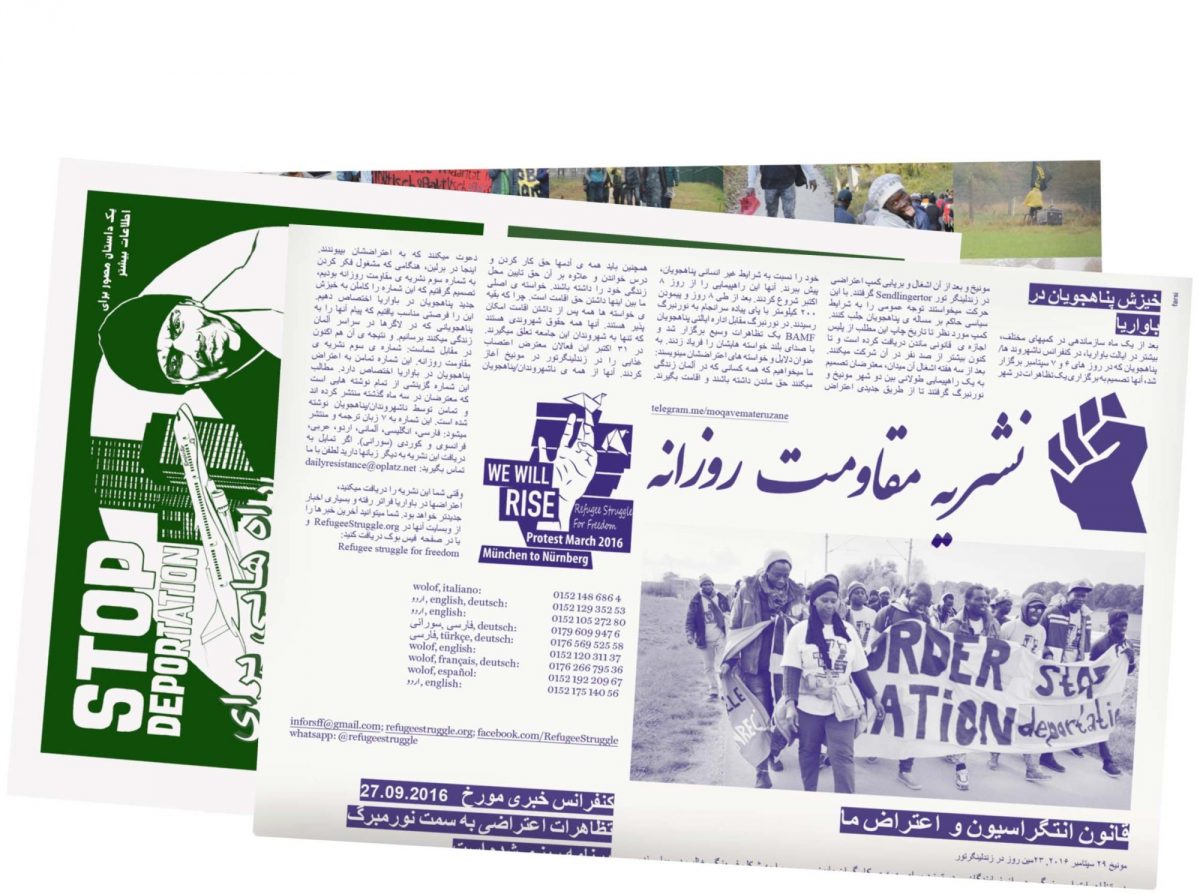 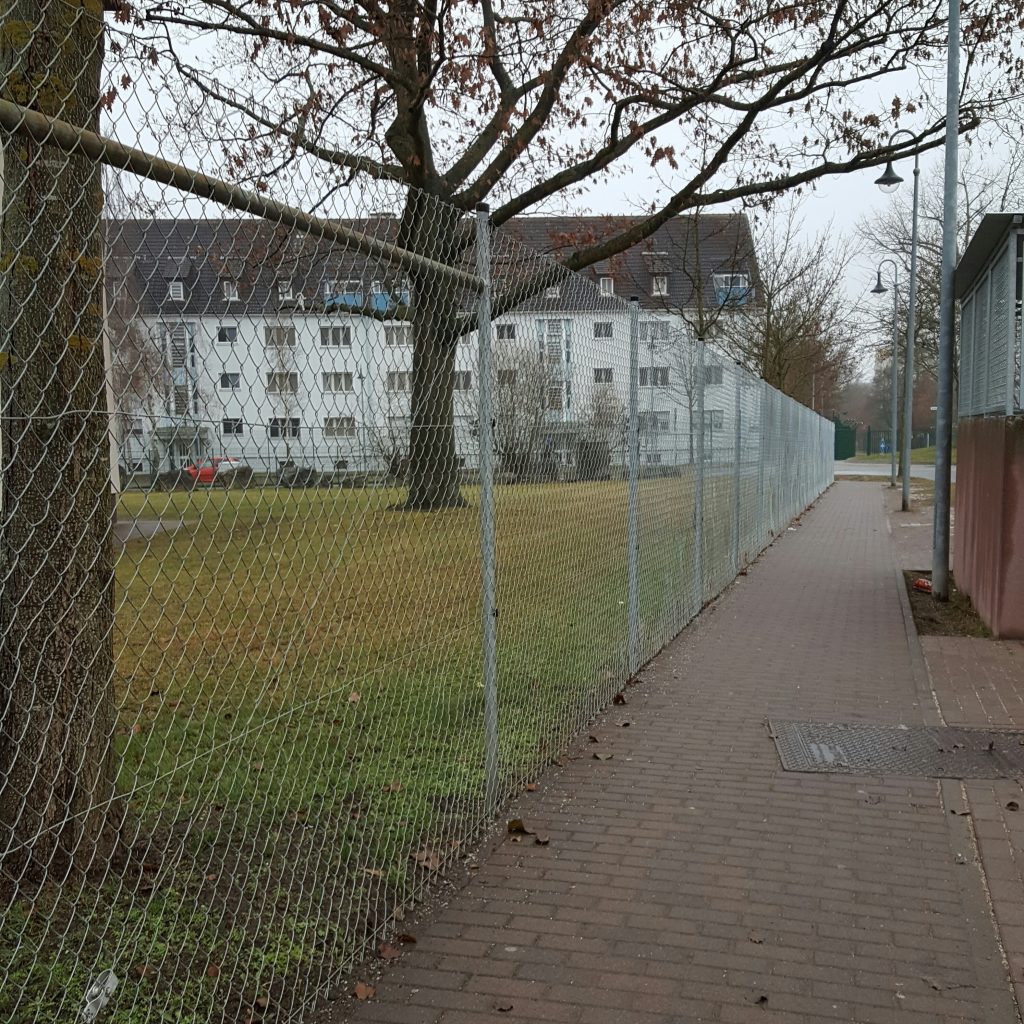 „So I want to tell the people what happens in Germany and what they do there to us. People burn themselves in the deportation prisons. They hang themselves, they cut themselves. I will remember what is going on there, in the JVA Mühldorf.
This is racism: Freedom is just for you.
I will not stop to fight for freedom. It does not matter if you are black or white, because freedom is for all the people.
We are not criminal, not Taliban, we don‘t do anything to somebody. It is not for my self interest. Racism destroys also the future of young generations. If they don‘t deeply unterstand, it is very dangerous.“

Solidarity with the hungerstriking refugees in deportation prison Mühldorf!

Since Sunday, 21st of February 2016 in the deportation prison in
Mühldorf (Bavaria) five refugees are in hunger strike. They protest for
the improvement of their imprisonment conditions and against their
deportations.

On Tuesday, 23rd of February a fire broke out in one of the prison
cells. The circumstances are still not clear, authorities accuse Ahmed
Saidzade – one of the hunger strikers – that he has set the fire.

On Wednesday, 24th of February 2016 Ahmed Saidzade was deported under
perilous circumstances with Air India to Afghanistan. Despite that fact
that he had been injured from the fire in his cell on Tuesday night, the
German authorities returned him. The psychological and physical
situation of Ahmed Saidzade was catastrophic in these circumstances.

With his deportation, the authorities and the airline Air India ignored
this dangerous situation and put their racist asylum policies so above his
life. And last but not least the situation in Afghanistan continues
perilous! Protests at the airport in Frankfurt and through a fax and
telephone campaign remained unheard.

Another four refugees are still on hunger strike in the deportation
prison Mühldorf. Because of the detention they are isolated from the
public and thus limited in their possibilities of direct personal, political
and legal support.

On Thursday, 25th of February, the foreign office in Munich was squatted
in solidarity with the hunger strike. Activists chained themselves on
the central entrance door and blocked it six hours untill they were evicted.

These were the demands:

What can you do to support the hunger strikers?

> Sign these demands. Send the name of you/ your group to solidarity.with.refugees@riseup.net.
> Spread the word, so that the voices from those in the inside are being heard!
> Put pressure on the responsibles with solidarity actions, protest letters and so on!
> Send solidarity messages to the hungerstrikers

About the hunger strike
(started at 21.02.2016)
BR
Wochenblatt
Resistance of Refugees

About the deportation of the hungerstriker Ahmed S.
24.02.2016
OVB Online
Refugee Struggle For Freedom

About the manifestation at the JVA Mühldorf
01.03.2016
Waffen der Kritik München
Wochenblatt

On Monday, 14.03.2016, Zaki, the last hungerstriker of JVA Mühldorf was deported with Air India from Frankfurt to Afghanistan. There will be a statement in the next days.