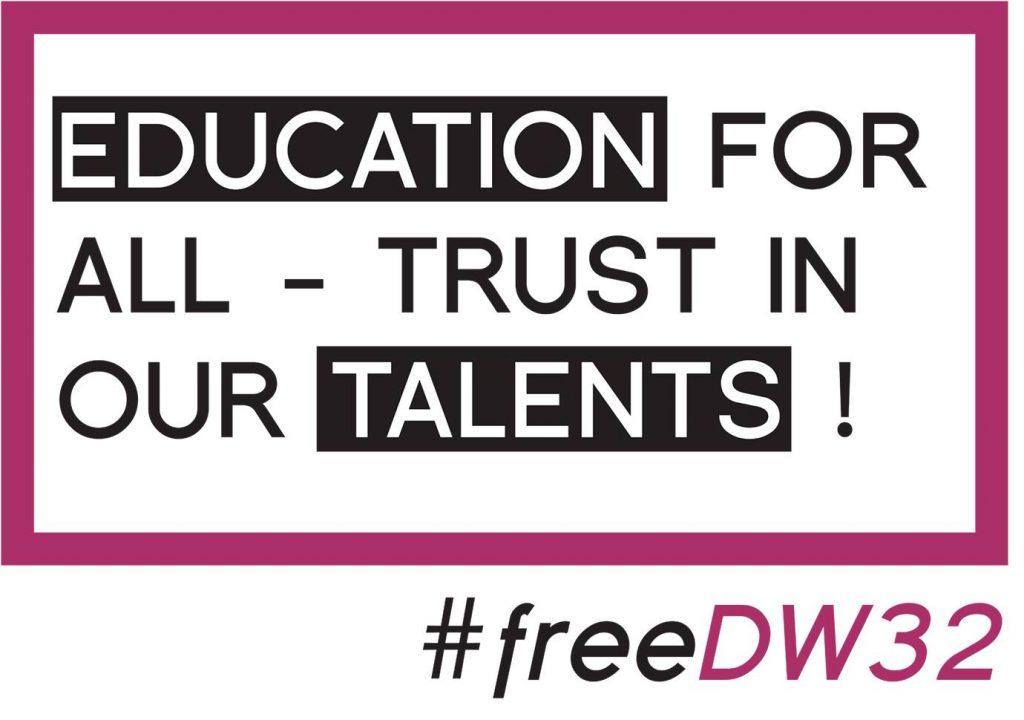 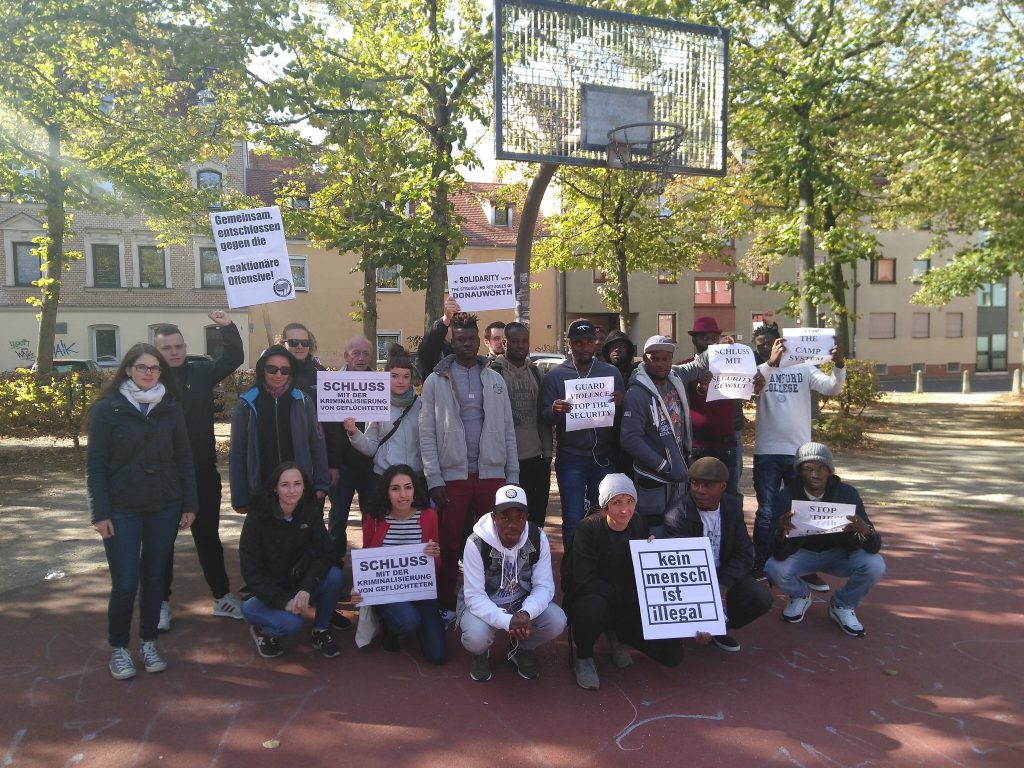 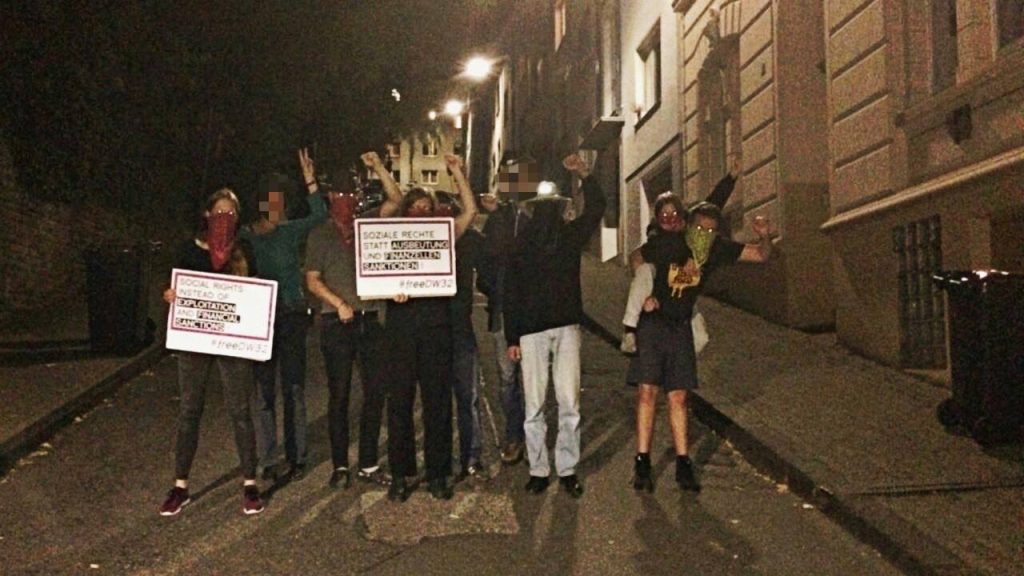 To lay down one’s own work in protest in order to demand better working and living conditions – for people in precarious working conditions or with an uncertain residence status this is often not possible. Those who work hard without a contract, or whose residence status depends on a permanent position, are often forced to be particularly cautious at work. But also people who do not get a work permit in the first place cannot go on strike in Germany – from a purely legal point of view. When refugees went on strike at the Donauwörth reception centre in February 2018 against the 80 cent jobs, they were denied this basic right as well. For some years now, the #EuroMayDay parades in various European cities have been an attempt to make different precarious realities of life and work visible and to bring precisely those to the streets who cannot strike like the epitomised assembly line workers – such as illegalised people, care workers or mothers. 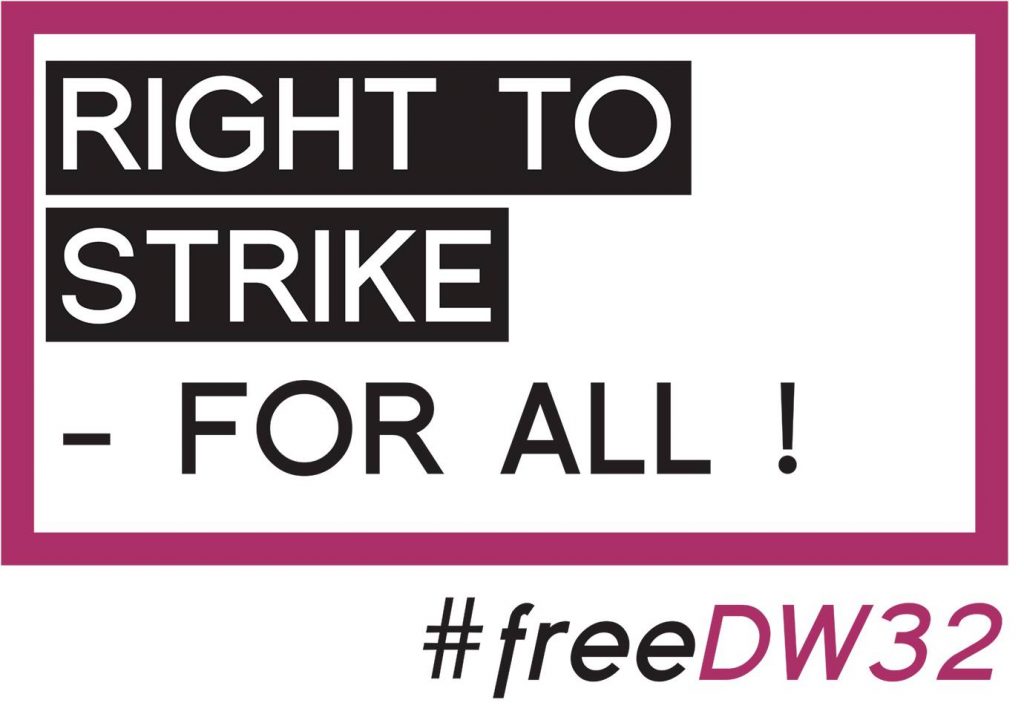 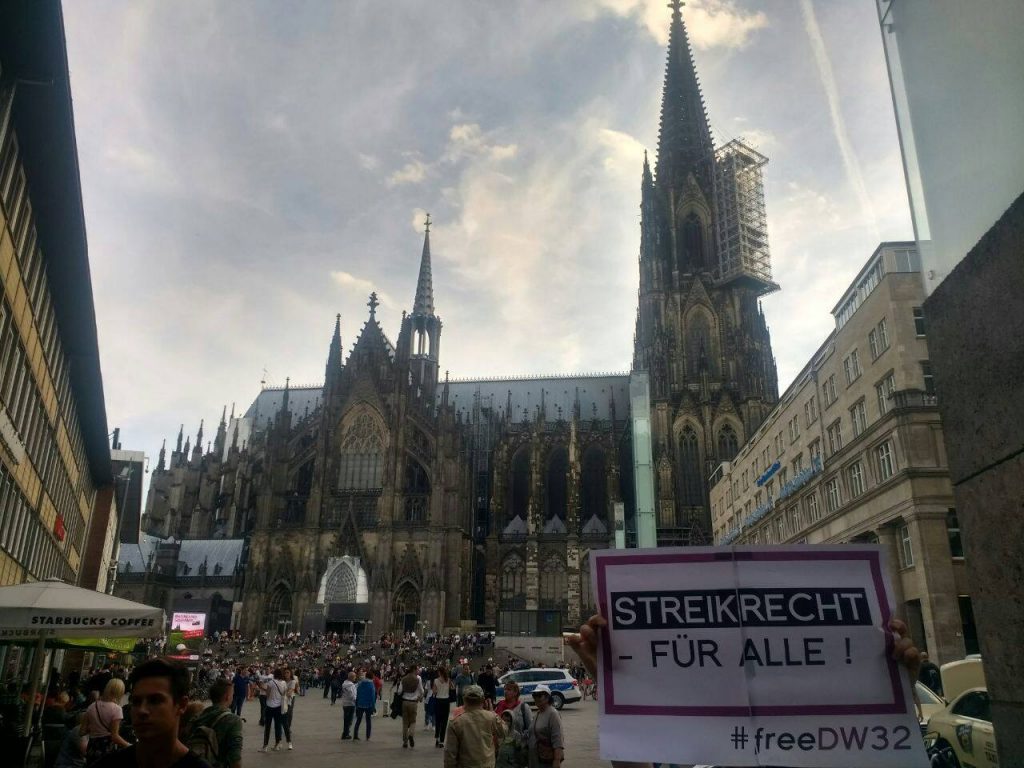 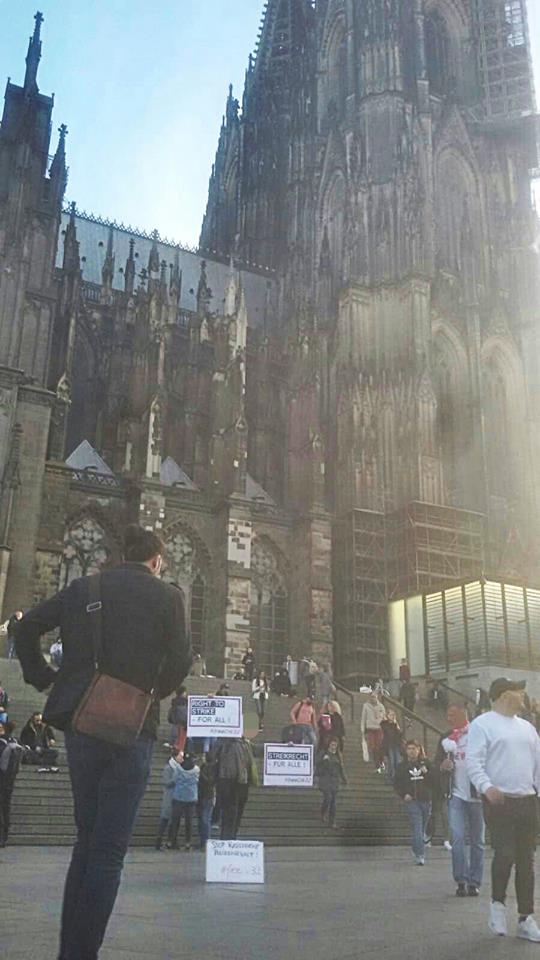 In the beginning of this year, refugees in Donauwörth organised a strike in the 80-cent jobs (1). The Malteser threatened them with the reduction of the pocket money of all people strikers. What followed, was worse: Massive police brutality and mass imprisonment. People in the asylum procedure are forced, among other things, by work prohibitions into these precarious jobs. For 80 cents an hour they clean the camps or work in the canteen.

Not all social workers in Germany are engaged with the values (1) of their profession. At the same time, when some declare “We are social workers, not deportation assistants” (2) and try to fight together with the clients against racism (3) at the working place and elsewhere, others unterstood it completly wrong. Instead of showing solidarity they cooperate with the police and identified the allaged criminals, what leads to the detention of 32 residents of the Lager Donauwörth. But this is only the tip of the iceberg: Day by day socialworkes take part in repressive measures, like the illegal refusal of pocket money or the unileteral counselling for so called “voluntarily departure”, instead of support of defending against the violence.
****
(1) http://www.aks-muenchen.de/wp-content/uploads/AKSAbschiebehelferPositionspapier2.pdf
(2) https://www.dbsh.de/sozialpolitik.html
(3) https://jena.fau.org/2018/05/22/professionelle-standards-der-schulsozialarbeit-in-bezug-auf-rassistische-diskriminierung-und-gewalt/
Initially, the authorities met the political self-organization of the refugees in Donauwörth with silence and ignorance. After the raid by the police on 14.03.18, the detainees were accused of disorderly conduct (Landfriedensbruch) and resistance against law enforcement officers, among other things. Especially these two offences are used extremely arbitrarily: For a charge of resistance, it is sufficient for police officers to claim that someone has resisted. If the evidence is missing, they cover each other up with false statements. The accusation of Landfriedensbruch is always used where even a resistance cannot be constructed. Because anyone who speaks out against German laws can be a trespasser. It is clear that it has been tried to prevent any resistance against deportations – no matter how quiet it is and which careful form it may have – and to intimidate refugees so that they would dare no more organization in the future.
Every day the right to freedom of movement is denied to people from the global South – when new deals are negotiated with the Libyan Coast Guard, Merkel tours African states to negotiate new readmission agreements, sea rescue boats are denied mooring in ports, people are violently torn away from their surroundings and from their friends, and forced into deportation planes. Fortress Europe omnipresent, absurd and murderous. When in February 2018 more than one hundred people from the Donauwörth reception centre decided not to wait for their Dublin deportations to Italy, but to return there themselves, they were denied departure with massive police presence. Despite heavily armed police, fences several metres high and increasingly modern border security systems: de facto people constantly take their right to freedom of movement, find loopholes in the inhuman asylum law, cross borders and overcome fences. 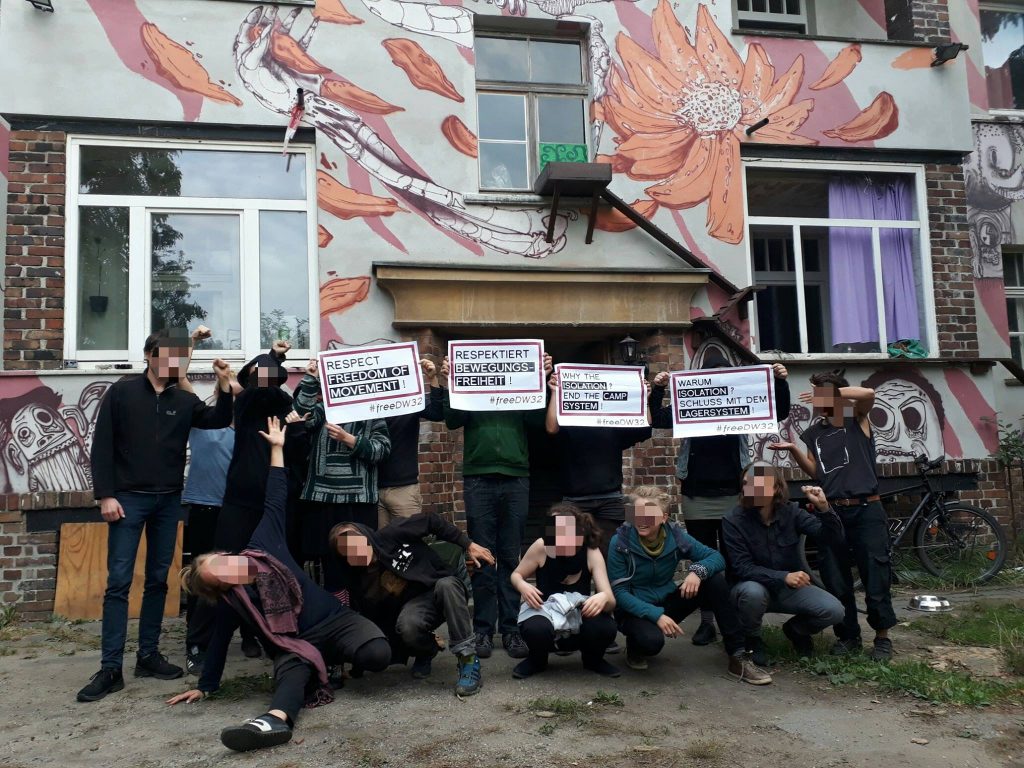 With slogans like “Lager still means exclusion” or “The authorities are threatening refugees with imprisonment“, refugees fight since years “For decentral accommodation for all!“. Isolation is the ultimate principle of all Lagers – no matter if they are in the desert of Libya, the forest of Bavaria or the industrial areas of large cities in Germany. Isolation intensivses control, harrassment, chicanes, and penalization. The AnkER-centres (5) are a racist idea from the “middle of society”, and every Lager is a health endangering, life-threathening, exploitative, and repressive catastrophy.

Donauwörth 14.03.2018, Ellwangen 30.04.2018, Deggendorf 14.05.2018, Waldkraiburg 07.06.2018 : These are only four examples of bigger police operations in refugee camps in southern Germanys, which became known to a wider public. In these raids, the protest against the unspeakable living conditions was answered with massive violence. But even without protest, raids in camps are an everyday occurence. After the new Bavarian integration-law came into force, 197 bigger, unannounced raids were conducted by the police – without the need to present a concrete “reason” or “suspicion”, or a court order. This means that such a raid happens every second day!
http://www1.bayern.landtag.de/www/ElanTextAblage_WP17/Drucksachen/Schriftliche%20Anfragen/17_0019781.pdf
“The police were very armed with: short guns, battons, tear gas, pepper spray, metal and plastic handcuffs, long sticks, dogs, ropes and protective gears like helmet ans gloves. In the corridors the Gambian refugees tried to ask the police what was going on and why they were in the camp, but all we received as answer was pepper spray on our faces”. (Chronology of the Events in the Donauwörth Reception Camp by David Jassey). The expansion of the powers of public servants and authorities in May 2017, as well as the recent tightening of the Bavarian Polizeiaufgabengesetz (PAG) in 2017 and 2018 result in a legal facilitation of violent excesses and repression. Thus, in January 2018, the PAG declared camps as “dangerous places”, and thus legitimised excessive police operations and raids for which there must not even be given a valid “reason”. The Bavarian state of affairs and Donauwörth are only the most disgusting examples of the systematic use of police violence to smash protest and legitimize racism and deportation. As the case in Baden-Württemberg’s #Ellwangen shows, resistance and trespassing of those affected by police violence are constructed as accusations in order to be able to turn police officers into victims and refugees into perpetrators. 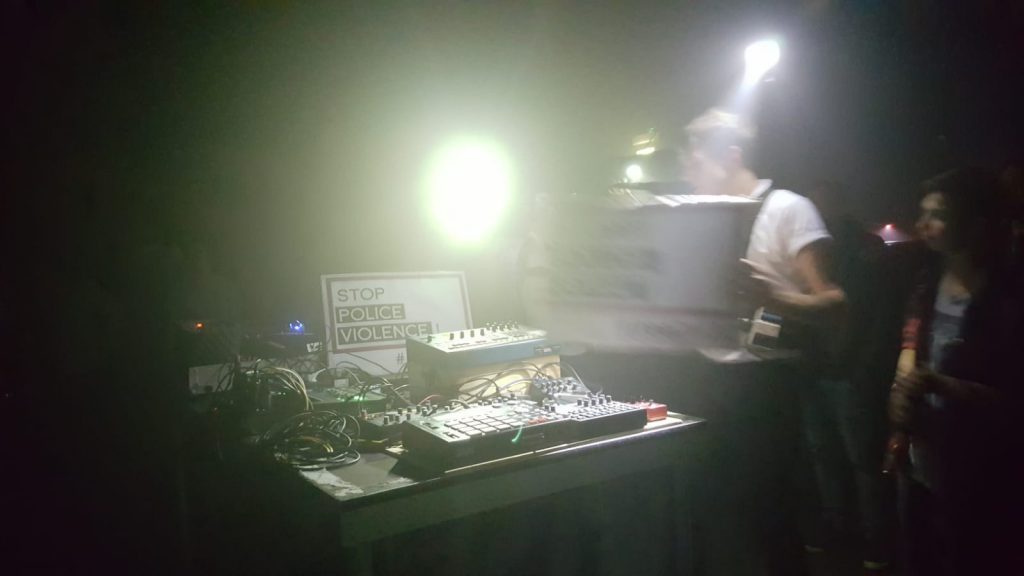 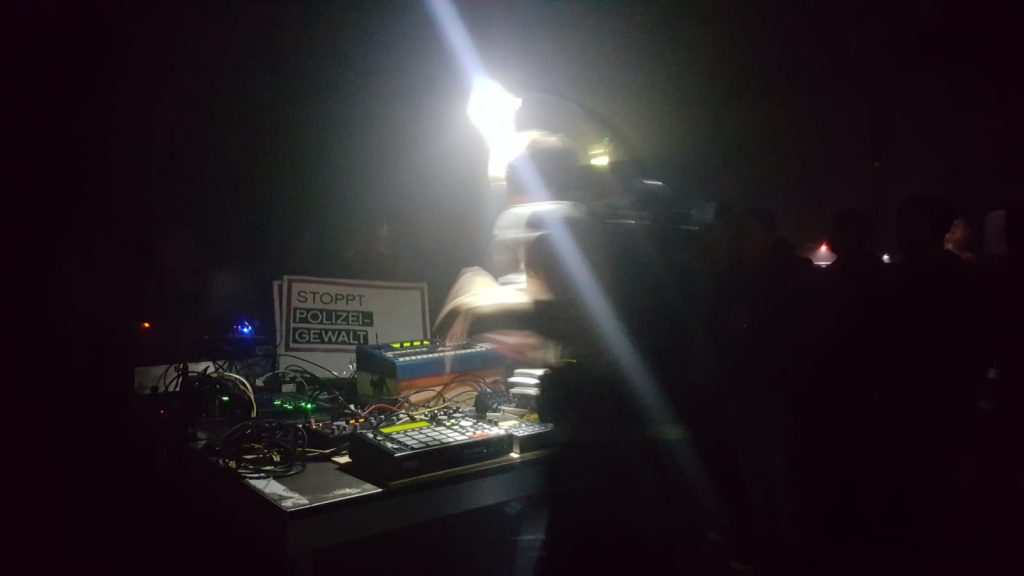